Retrospectives serve a purpose: In the long run, we want to improve and that means trying out things. If all that ever happens is talking and nothing ever changes due to retros, then why do them? Teams quickly learn to hate retros if they don’t result in change. 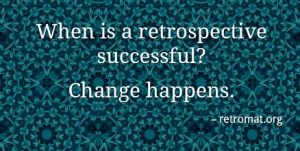 So, how do you get change due to retrospectives? Let me tell you about the team with the best follow-through I’ve ever had the pleasure of working with: Each retro they added all action items and rule changes to a big sheet of flipchart paper. Each item had a “revisit”-date attached to – the date when the team thought they’d be able to judge the effect (usually 2, 4 or 6 weeks). At the beginning of each retro we would go down the list of all open items that had reached the revisit date and inspect them. Did the team do it? Did it work as intended? If yes, rule changes were made permanent and actions crossed off. If not, the items were consciously dropped or changed.

They had continuous improvement down to an art. It was a joy to facilitate their retros. They devoted a huge chunk of time to this process – 20-30 minutes out of 60. That sounds like a lot (it is!) but it worked very well for them. By the time they had analyzed the list, they usually had covered a lot of the things that bugged them anyway.

I’ve never again seen such consistent follow-up. That’s why I suggest at least a bare bones “Phase 0” to replicate this success: Bring the list of last retro’s agreements and ask what happened with them – for about 5 minutes.

With a mature team, I’ll do this every once in a while. If I think there’s a problematic pattern, I’ll do it more often. I try my damnedest not to be accusing, but if the team consistently does very little of what they agreed to do, that’s points to a problem. Phase 0 helps us find this out so that we can work on the lack of follow-through.

Other peole have developed similar concepts (at least Marc Löffler and Judith Andresen). But for most it’s the “New Phase 2”, in between “Set the Stage” and “Gather Data” (from the 5 phases of a retrospective). They feel it’s important to have “Set the Stage” as the very first phase so that participants “arrive”. And I’ve come around to their way of thinking. So scratch “Phase 0”, long live “New Phase 2”!

PS: Did you know there's a Retromat eBook with all activities from Retromat, plus tips and tricks? Check out the eBook